A page about my sculpture for the Ingot Prize

to be exhibited at Bowman Sculpture, London 18th July-29th July 2016

Inside surges and takes flight

With monumental effort and push

Through which the gold is glimpsed

As it shines, striving to break free

Body moulding began at London Bronze Casting, in Bermondsey, London, on 10th October.  Working with technicians, Tom & Derek from London Bronze Casting, along with Tom Needham (sculptor).  The first mould was of part of my forearm, wrist and hand holding onto a gym ring.  We made this mould as a trial run, to see how the process worked and to take a look at how the mould looked in terms of detail. 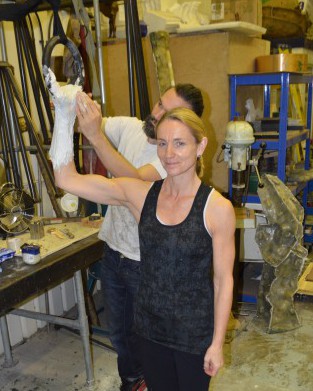 Alginate was applied, then Mud Rock.  Once it had set the mould was cut off using a metal blade. I had explored the properties of the alginate and needed to watch for colour change from pink to white and to feel on the skin for a particular alteration in the consistency of the alginate. Once the right sensation was there I introduced tension to the pose.

Tom making a wax mould from the alginate, trial mould.

Once we had seen the process through and that the tension registered well, the work began on the larger, body moulds for the sculpture. Having trained hard to hold tension for over three minutes, using weight to intensify the strength build up, which was an ample length of time for the alginate to go off; the process for a body mould from starting to apply the alginate to cutting me free of the mould, was around an hour.  Endurance became fused into the moulds. The idea evolved through process… 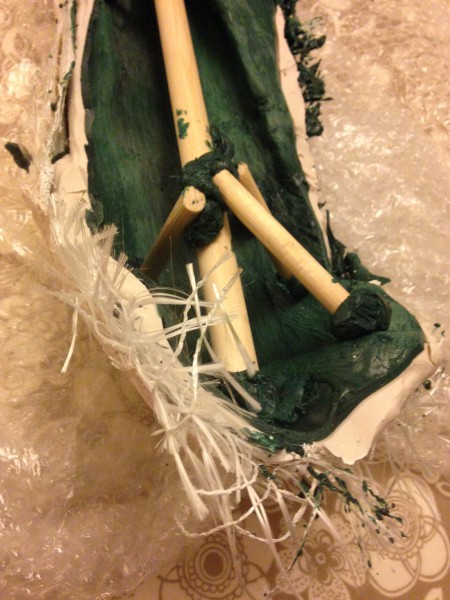 Having been awarded the first Ingot prize, along with Harry & Jim; work has begun. I have had my first meeting up at The London Bronze Casting studio.  Training is intense, diet is clean and experimentations with wax are the focus currently.